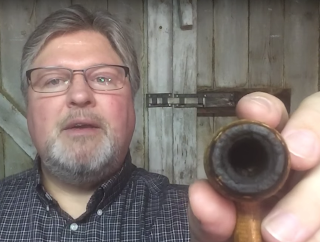 I just had a conversation in a FB group about corn cob pipes and "cake" that naturally builds-up in the chamber of any tobacco pipe and if it's a good or bad thing. I talked about this in a YT video several years ago (below) but rather than rewatch it I thought I'd put my current thoughts on the topic here and we'll see if they've evolved. I have a couple vintage pipes in my collection that have quite a bit of cake and there seems to be no ill effect to the cob. I've heard the popular belief that cake will expand and swell, causing the cob to crack and split, but none of these old cobs show any signs of this. Oddly enough, I have modern cobs that have seen far less action and have no cake at all but have developed cracks.  What does this mean? It may be luck of the draw. I may have found the rare old cob that just won't die, while most of the others of their vintage are long gone. Or perhaps the cobs of today just aren't what they used to be. Who knows?

As for cake, I kind of like seeing it there. It means that when I smoke my next bowl-full there's less chance of it burning through the wall of cob. Sure, it may mean that the flavor of the past tobaccos will linger on (ghosting), but then again, I enjoyed those tobaccos! If I smoked a blend or two that displeased me, I certainly didn't smoke enough of them to add their taste to the cake. The exception might be some of the nasty ropes or twists that I now avoid like the plague!

When smoking tobacco in a pipe, do you inhale?

So, what's this all about?

I'm a huge fan of the Aristocob pipe and am always on the look-out for new and used pipes and new corn cob liners.

I decided that whenever I find one for sale on eBay or elsewhere on the web that I'd start to build a database of the items and the final price. You will see as I did, that the prices have very little to do with the pipe's value! Some very nice Aristocob pipes have been sold for less than $10, and some awful pipes have sold for more than $40!

If you see no final price listed it may be because it's an active listing, so click the link and feel free to bid. Good luck!

Have a story, photo or link to share? Please do! E-mail Me!
Scott

P.S. If you don't have anything better to do you can even follow us on Twitter! http://twitter.com/aristocob

Visit Our Other Web Sites & Blogs

PIPE HOLDERS and RACKS for Sale